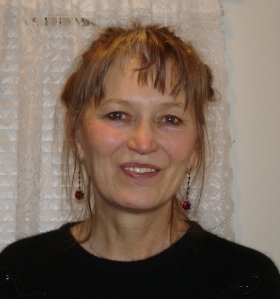 “I want to contribute in some way. It is like me to want to do something with a lot of freedom about when I do it. I don’t have to schedule it with other people; I can do it if and when I want to and I like that what I’m doing is outdoors. I think every action makes a difference. Every ounce of peace in someone’s heart contributes to world peace.”

Self-directed projects to keep neighborhood storm drains clear of debris, and to preserve gutters and public staircases on my favorite walking route.

I want to contribute in some way. It is like me to want to do something with a lot of freedom about when I do it. I don’t have to schedule it with other people; I can do it if and when I want to and I like that what I’m doing is outdoors.

Jack Tomkinson started talking to me one day while I doing a clean-up project. He told me that there was a piece of property that had been purchased (top of hill) and I felt inspired by his enthusiasm. I felt like he was sensitive to what I wanted to hear and if I wanted to hear it, so he was being a promoter but not a mindless promoter. I really liked that. My mind also goes right away to people who work on political campaigns and how important that is.

I was working at University Hospital in Seattle, and it snowed one winter. When the snow melted, it flooded the area near Northlake Pizza and men were going down in their pickup trucks to get nurses to the hospital so my consciousness was raised about plugged storm drains.

I live a little way from Phinney Ridge and I exercise by walking that neighborhood several times a week. I have gotten to know the yards: what is blooming when and, when somebody mows their laws, where the grass goes. I started to notice the plugged storm drains all over the place.

The next fall, I started to pull leaves from the storm drains and I got this great satisfaction from seeing water flowing. It reminded of me when I was a kid growing up in Spokane. Our alley was not paved then, so we would turn the hose on, create waterways and learn about water flow. Altering flow was interesting to me.

Now I pull weeds and debris off the storm drains to let them flow. One area – a block-long 15 ft wide median – was plugged at the bottom of the hill. I would put my garbage cans in the back of my pickup and go over to the meridian and fill them with the leaves and bring them back for my yard waste pick up.

I realized that as I was cleaning out the storm drain, I wasn’t getting the stuff where the curb meets the street. There was enough debris there to support life, which was going to degrade the curb or the street, since roots are stronger than the pavement.

Then I started thinking “what if one person on every block kept their gutter clean in the fall?” There are so many evergreen needles, leaves and flatted pop bottles in the streets. I thought about how the people at the top of the hill were affecting the people at the bottom of the hill.

There is also a stairwell at the steepest part of the hill. I noticed that many people use these stairwells for exercise and to get places. I thought that all of the bacterial action from the rotting leaves was going to degrade the sidewalks. There is constant talk of city budget shortfalls, so I thought to myself, “the city is not going to have money to replace this stairwell.” That’s when I started to rake the leaves on the stairs and I bring my pruners to cut back the ivy.

Also on my walking route, there is an apartment building where the landscaping wasn’t being maintained. There were lots of plants – it’s so much fun to plant things, but nobody seemed to enjoy the maintenance as much. When I passed by, I would do some weeding. It felt really good to contribute since I loved the route. I believe in the power of little actions to contribute to the greater good.

I go back and forth a bit. I’m a little self conscious about picking up debris near people’s houses, because I don’t want anyone to feel judged. But then I think, maybe someone will be inspired – maybe they’ll kind of recognize the issue – maybe it’ll raise their consciousness.

I have also done a couple of service projects with Sierra club – including one to New York City. I decided that I want to fit volunteer work into travel so that it is not all about my personal satisfaction. That means more to me. It also fits my need to get to know local issues and local people. I had thought about that with my work as a nurse as well. I have talked to people who have done health work in developing countries. There is such incredible need there, but I’m not quite ready for the health risks.

With Habitat for Humanity, I helped to build a six-plex in Poland. 12 of us from all over US worked together. Although the living spaces we built were small, the people were tearfully grateful to have their own place.

Sometimes I think about encouraging children to volunteer at young ages. My kids had babysitters who were in high school and their mom had them volunteering at a young age. I really liked that.